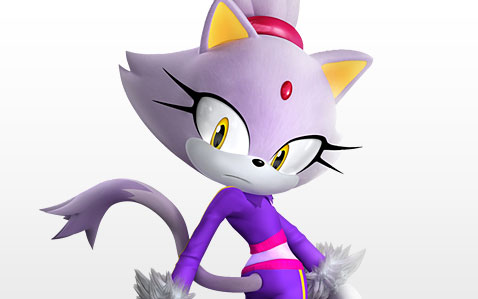 Blaze the Cat is a princess and the guardian of the Sol Emeralds, a role similar to that held by Knuckles. She is sometimes referred to as a queen; She is called "Queen Blaze the Cat" on the official Sega of America Sonic mini site, Sonic Central, as well as the Sonic the Hedgehog (2006) game website.

She wears gloves similar to those worn by Sonic, only there's fuzzy lining on the cuffs. Her shoes have the same motif as Sonic's, but they have fuzzy lining and are high-heeled. She also wears a purple robe, lined at the neck with gold (possibly a necklace) and at the bottom with magenta, and a pair of white tights. She has a ponytail, and a jewel-like red orb is present on her forehead.