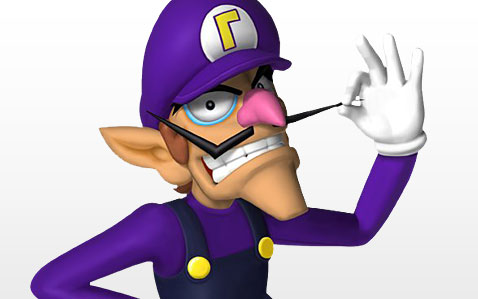 Waluigi is Luigi's evil counterpart and nemesis. He is Wario's partner. Deliberately created to be a selectable character in various multiplayer games. He has been playable in several games to date, although none of them can be classified as mainstream adventures in the Mario series.

The details of Waluigi's past are unclear, as he is an extremely undeveloped character with no confirmed back story. Waluigi simply appeared in the Mario series as an apparently long-time resident of the Mushroom Kingdom with no explanation regarding his background. Most of Waluigi's history is in the opening movies of Mario sports titles. which usually showed Wario and Waluigi's schemes.