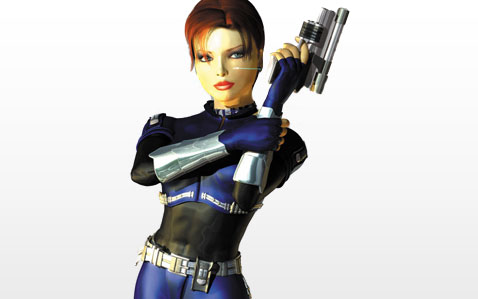 Joanna Dark is a highly skilled but inexperienced Agent of the Carrington Institute. She was born on March 18, 2000, in Atlanta and moved to England shortly afterwards. She is most notable for her red hair, blue eyes and slender but athletic build. She usually dresses in tight leather clothes although she is most commonly seen in her Carrington Institute outfit.

She initially worked as a bounty hunter with her father, but was then recruited by Daniel Carrington to work with him. Joanna has a strong personality; she is very energetic, competitive, courageous, and she never complains, even if she is wounded. She does not trust people easily, especially those whom are associated with the megacorporations. She also has a good sense of humor despite her strong character.

She has earned the code name "Perfect Dark" due to her exceptional scores in training and high proficiency with a huge variety of weapons. In 2006, she was ranked #9 in GameTrailers Top Ten Women of Gaming.