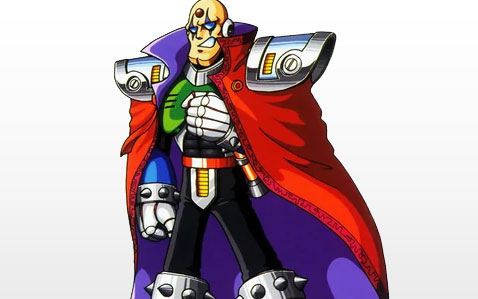 Sigma is the main antagonist of the Mega Man X series. Created by Dr. Cain, Sigma was considered the finest of the Reploids and was the first leader of the Maverick Hunters; peace-keeping Reploids who defend humans against their renegade counterparts. Although he was once honorable, Sigma unexpectedly goes Maverick in the beginning of Mega Man X and rebels against humankind. He defects to the Mavericks and assumes the role of their leader. Under Sigma's command, the Mavericks grow into a legion dedicated to the extermination of the human race. Sigma instigates many of the destructive Maverick Wars, with the Maverick Hunters existing to crush Sigma and his minions.

Sigma appears as a bulky, bald humanoid in most of his forms; his most pronounced feature is a crystal on his forehead, and two parallel scars running through his eyes. He often produces a second form after his initial defeat in a game, which frequently has the head (or the crystal on it) as a weak point. Although he has been destroyed countless times, Sigma's programming always survives and builds himself a new form, ready to menace the world once again.

It is implied that he grows more insidious and vengeful with each transformation, with each successive plan becoming more and more desperate and aggressive. His primary enemies are X, Zero, and more recently, Axl.